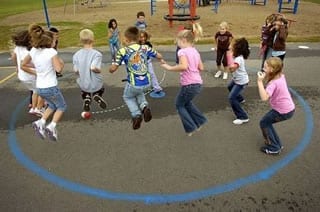 Students join in a structured recess game and can move around to other activities.

All the paint on the sidewalks and basketball court at Westwood Elementary School is serving to provide a more structured recess setting.

In one spot, children are playing the classic game hopscotch while nearby others play a passing game called step back and a group stands on a painted circle for a game called helicopter.

Westwood bought the Peaceful Playground kit for about $1,000. It comes with about 100 templates for games for a structure recess. The physical education teachers painted the required patterns on the concrete and asphalt surfaces at the playground. They taught the children one set of rules for each game to limit disagreements.

“Our idea was to make structured recess a more valuable learning time and to give kids more options for productive play and hopefully reduce incidents,” Principal Janet Knoll said.

Students use the games during physical education classes, lunch and recess.

Third-grader Henry Smith likes to play four square, a game about returning a bouncing ball to your three opponents in a square divided into four parts.

“It’s fun. It gives you good strength in your hands. It’s just really, really fun for everybody,” Smith said as he waited his turn to play.

On a mild fall day, physical education teacher Dave Holder, wearing a T-shirt and shorts with a whistle around his neck, stands on the basketball court and assists the children as they play the games.

He points out when a student might not be following the rules and occasionally jumps in the circle of students to twirl the rope for the helicopter game, where students try to avoid getting hit by a ball attached to a jump rope.

“I see them getting involved in different activities that they haven’t been before,” Holder said.

In addition to keeping order, the games help the school meet its fitness goals.

Students who don’t want to play the structured recess games can follow a yellow line painted on the grass. The line is one-fifth of a mile and students keep track of the number of miles they walk, trying to make the 100-mile club.

On a nearby sidewalk, painted with colored circles, Carter Reiland and Reggie Deyak toss a football in a game of step back.

The game is designed to improve the fundamentals of throwing. The two boys start face to face and move back one circle each time they catch the ball.

“You have to throw it to the person and step back,” Reiland said.

Chris Conlon and Cole Jennings are playing the same game a few yards away with a round ball.

“Sometimes Chris will throw it high, and it’s hard for me to catch,” Jennings said.

The Recess Advocacy Toolkit includes: parent letters, a powerpoint presentation, a meeting agenda, and advocacy guide for Saving School Recess. It can be download here : https://peacefulplaygrounds.com/right-to-recess-campaign/