Everything I learned in life I learned on the playground

I watched a less popular girl, Allison, walk up to a group of four girls who were playing a game of four-square. As she approached and asked, “Can I play?” she was quickly rebuffed. “The game is closed,” Janey, the ring leader, announced.

Given the school is a Peaceful Playgrounds school, I was surprised at the response because of the “You can’t say, ‘You can’t play’” mantra. Allison, whose disappointment was obvious, turned to play another game. Fortunately, the playground was filled with alternate game choices and two other four-square courts. Allison selected one of those courts and soon was involved in another four-square game. This time she didn’t ask, but rather waited in line by the letter D.

Permission: is it a good idea?

It was an interesting observation for a number of reasons. I began to dissect what happened and why. In the first situation, Allison asked for permission to play. “Can I play?” allowed Janey the opportunity to respond and in fact, reject her request.

Entwined with the actions of young children was a lesson. When you act in accordance with the school rules (wait in line and go in when appropriate), that behavior makes rejection less likely.

Exclusion is not always playground bullying 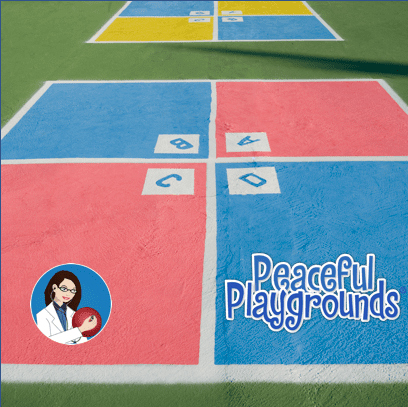 I’ve been working on an online bullying prevention course for school staffs which meets state requirements for staff training. This reminded me of what I’ve been writing about the way girls bully. Girls typically get involved with indirect types of bullying, for example nasty staring, spreading rumors, manipulating friendships, and excluding peers. The four girls who turned Allison away all participated in Janey’s decree of “You can’t play.” However, it wasn’t bullying as described, because there was no mention of a power differential. The intent to hurt was questionable. Although it didn’t meet the criteria for bullying, the activity was still hurtful, as evidenced by Allison’s reaction.

Why didn’t Allison remind them of the school rule, “You can’t say, ‘You can’t play’”? I’m not sure. If that was the only four-square court, perhaps she would have. This illustrates the importance of painting multiple markings of the same court. When we gathered information about children’s play choices, we observed that children often picked a less preferred game rather than wait in line on a Peaceful Playground.

Whether or not a child invokes this rule, it illustrates the notion that all kids get to play all games. 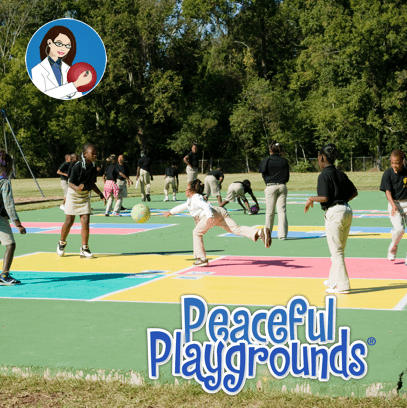 Peaceful Playgrounds advocates painting multiple games with the same marking. For the reason illustrated in the situation above, if children want to play a particular game, they have options.

3. Kids pick an alternative playground game rather than wait in line.

We have found that multiple game markings are important. For example, if all four-square courts have lines necessitating waiting in line, we observed that rather than wait in line children select a less preferred game most of the time.

We have operated under the philosophy that the playground is an opportunity for students to practice what they may face in life. Sometimes, in some situations, people may choose not to engage with certain people. The rejection on the playground or the ability to maneuver when faced with rejection is a life skill that needs to be developed. Sometimes the hard reality of life is that we are excluded.

5. Everything I learned in life I learned on the playground.

When I speak at conventions I typically end my presentation with the poem, Everything I learned in life I learned on the playground, which speaks to the importance of recess and what children learn who are given this opportunity.

Everything I Learned In Life I Learned On The Playground
Everything-I-learned-in-life-I-learned-on-the-playground.pdf

Everything I learned in life I learned on the playground poem

Everything I learned in life I learned on the playground

Play by the rules. BEHAVE or you’ll not get to play.Dress appropriately. Keep track of your stuff.

Make friends. Tolerate DIFFERENCES of others.

Consider the FEELINGS of others. Give everyone a CHANCE.

Get along. Be humble.

Don’t tear up the equipment. Put stuff back where you found it.

Practice getting better at everything. Know the score.

NEVER GIVE UP! TRY YOUR BEST ALWAYS IN ALL WAYS! 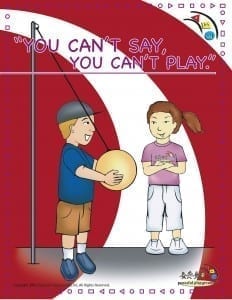