Marana School Playing with a Change on its Playground

There’s something that’s supposed to keep children from fighting on the playground, reduce playground injuries, and a lot more.

What is this miracle?

It all starts with some paint on the playground, creating all sorts of areas for games.

There are balls, jump ropes, bean bags and more, and suddenly the children are learning and getting new skills.

The children at Twin Peaks School in Marana are in training, learning to play new games, and getting valuable lessons including simple problem solving ideas.

School counselor Shari Attebery asks the third-graders gathered on the playground, “This is a peaceful playground. Do we tolerate bullies?”

“No!” the children yell.

There are high expectations with the Peaceful Playgrounds program.

“It’s going to eliminate all the bullies. The bullies can have more games to play and they won’t fight,” third-grader Victor Roberts says.

Now, about those new games the children are learning. They really seem to be a hit.

“Like some of the games I’ve heard about and my friends have played them and so I really wanted to know how to play,” third-grader Olivia McNally says

Peaceful Playgrounds is in about 8,000 schools across the country.

Peaceful Playgrounds is for the whole school, kindergarten through sixth grade. 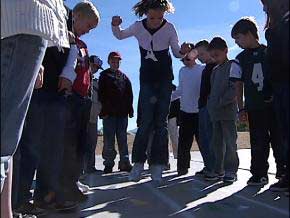 It includes game areas painted on the concrete, and plenty of play equipment.

The children get a lot more choices during recess.

“It also really encourages healthy lifestyles and fitness, get the kids actually playing games and makes the playground a fun atmosphere for them,” Principal Dondi Luce says.

And it turns out hopscotch and jump rope and bean bag toss can do so much more than that.

“We’re going to teach them how to play the games. They’ll have the equipment they need to play the games with. So, it gives them more options and enough things so everyone can participate actively,” Luce says.

Plus, there’s a surprise bonus. Fewer children getting hurt.

“You can imagine, if kids are congested, they’re more likely to fall or bump one another or get hurt. Whereas, with this program the kids are spread throughout the playground,” Luce says.

It seems like plenty of bang for the buck, but what do the students think?

Peaceful Playgrounds is in about 8,000 schools across the country.

Twin Peaks Elementary School is spending about $5,000 to get it started here.

The money comes from a federal grant, plus students and parents have raised some of it.

Children were surveyed before, and will be surveyed again a few months from now to see if it does all it promises here.

KOLD TV – Marana School Playing with a Change on its Playground