As the second-oldest campus in the school district, volunteers renovated Lake Grove Elementary’s playground on a $20,000 grant by adding some “rock” play structures and painting scotch, four square, and other activities on the pavement to create a “Peaceful Playground.” 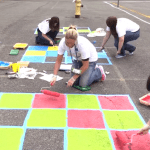 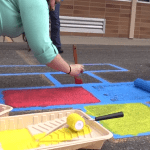 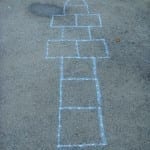 The project is one of many activities surrounding the 2014 NFL Kickoff leading up to Thursday’s game at Century Link Field.

“I’ve always made a commitment to be involved in the community I’ve lived in,” said Largent in an interview, who was a Seahawks wide receiver for 13 years. “Seattle was a community I lived in for a long time, and I still love Seattle. It’s fun to be back, to be part of this with the NFL and the people that are out here working today, and to show that it was important when I was a player and is still important today.”

Largent said it’s encouraging to see athletes, such as Russell Wilson, have such dedication to their community, and it’s great to be able to point his almost nine grandchildren in that direction. 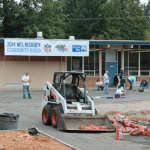 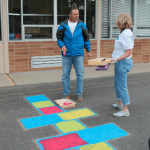 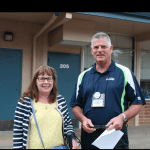 Strong spent much of the time digging holes and pouring cement for a rock structure, while Largent painted hopscotch squares.

Doug Rutherford, the principal at Lake Grove, said at the end of the volunteer work, the playground will have 40 stenciled activities that encourage activity.

“We feel very fortunate,” Rutherford said. “We’re in a community that’s very supportive of the schools, and we want our school to be inviting and look good to our students.”

Rutherford added the project was able to come together all because of physical education teacher Dana Henry.

Each year, United Way and the NFL team together for the NFL Kickoff Community Legacy Project.

Henry said she believes Lake Grove was chosen because of the school’s participation in the “Fuel Up to Play 60,” a program by the NFL and Washington State Dairy Council.

“Our school worked really hard last year to have kids be more active before school,” Henry said. “We added some before school and after school things. We had walking club in the morning, we offered tennis, basketball, soccer and track after school, and we did different things during the school day.”

Lake Grove was one of 14 schools in the district involved in the “Fuel Up to Play 60” program last year.

“For the first time since I’ve been in the district, the nutrition department sat down with P.E. people, and we talked together about what we could do to support kids,” Henry said. “Half of the grant money we got from ‘Fuel Up to Play 60’ went to the nutrition department, and they designed healthier menus for kids;  they got a bagger sealer so they could [seal] more vegetables and fruits to give to kids.”

Interim Superintendent Sally McLean recognized Henry’s work in the project and that the district’s been able to hold on to elementary physical education throughout the years.

“The two superintendents I worked with before me all believed in educating the whole child,” McLean said. “We’ve held on to elementary P.E. in all the dark times.”

For more information about “Fuel Up to Play 60”, visit www.fueluptoplay60.com.

This site uses Akismet to reduce spam. Learn how your comment data is processed.