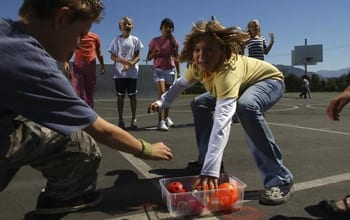 Kaity Webster had a list of new rules to learn at her Camarillo school this year, but she didn’t complain when she saw what she got in return.

The fifth-grader returned to University Preparation School to find the playground with a whole new set of playground markings painted with tricycle tracks, maps, and alphabet and number games — and the equipment racks stocked full of new balls, jump ropes, bean bags, and other equipment.

“Nobody has to fight for a ball anymore,” said Emily Esquivel, a fourth-grader at the charter school, which serves students from across Ventura County.

The elementary school has purchased “Peaceful Playgrounds,” an educational program designed by a private company to increase students’ physical activity and decrease bullying and injuries.

In the past, if there wasn’t anything to do on the playground, kids would stand around and do nothing, or worse, get into trouble, 8-year-old Sophia Lubka said. Last year, she participated in a student leadership club, which held fundraisers to help raise the $4,000 or so needed to purchase the new program and the equipment.

Peaceful Playgrounds has several parts, including new games and a consistent set of rules for all of them.

“You can’t say that you can’t play,” recited second-grader Riley Grizzard. And if someone has a problem, they have to “walk it, talk it or rock it.”

Riley explained that to resolve disagreements on the playground, students can walk away, try to talk to the other players, or play rock-paper-scissors to reach an agreement.

Whichever strategy they use, children can resolve conflicts quickly and by themselves, then get back to playing, said Michelle Cregor, a teacher who’s leading the school’s new efforts.

More than 8,000 U.S. schools now use Peaceful Playgrounds. Its company, which goes by the same name, says the program provides a practical, research-based plan to promote physical activity.

Nearly a quarter of all public schools report student bullying happening daily or at least once a week, according to the National Center of Education Statistics. The behavior typically starts in elementary school and often is found on playgrounds.

University Prep didn’t have a big bullying problem on campus when it signed up for the new program, but administrators said they liked its approach to settling conflicts and reducing confrontations on the playground.

“We were motivated by trying to make our school meet as many needs for kids as possible,” Cregor said.

Dozens of volunteers, including two Eagle Scouts, spent about 500 hours this summer painting age-appropriate games onto each of University Prep’s three playgrounds. The school also stocked up on new equipment and devised a checkout system to keep students accountable for the items they use, which is expected to cut down on losses.

The school also held training sessions for the staff and hired a playground coach to make sure everyone was familiar with the games, rules, and strategies.

Students are learning to make choices independently. They’re in a safe environment and they have access to constructive activities, Cregor said.