When students return to Sheboygan Falls Elementary School for the first day of the 2009-10 school year, a whole new world of fun, fitness, and creativity awaits from the school’s playground makeover.

Thanks to the initiative, hard work, and dedication of many teachers, staff, and parents, the SFES playground is in the process of undergoing a major transformation and rejuvenation, as part of the school’s newly incorporated Peaceful Playgrounds program.

According to SFES kindergarten teacher and Peaceful Playground Committee Member Amy Loehr, the goal of the new program is to provide a safe and user-friendly playground environment, while promoting physical movement and overall health and fitness.

“The idea for this came up last February when the topic of playground safety came up,” she said. “Kindergartners in particular often have a difficult time on a large playground like ours.

“At that time, several teachers came together to figure out a way to make the playground a safer and more inviting place for kids in all grades. We thought about ways to provide a few more positive options for kids during recess time.”

Based on her previous experience in another school district, Loehr introduced the possibility of establishing a Peaceful Playground program at SFES.

“Around March or April, we brought the idea to Mr. Mukavitz, and he was very supportive,” Loehr said. “However, we didn’t really have any money to work with. We had to put together several fundraisers to reach the $2,000 mark that we needed to start things up.

“Many people came on board to donate their time to push this forward,” she said. “For a time, we didn’t think we could make it happen for this school year. Around May, we found out we could do it, and we have been pushing forward ever since.”

After raising money through a brat fry/car wash at Blattner’s Piggly Wiggly and sales promotions at Culvers and Falls Firehouse Pizza, the project began to take shape.

With the pieces in place, the transformation process at the SFES playground got underway shortly after the completion of the 2008-09 school year.

“Once we were able to acquire the supply and equipment kit from Peaceful Playgrounds, we started to do some initial prep work,” Loehr said. “We did the stenciling and drew the outlines in mid-July.

“On July 27, it really started to come together when we began painting the game stations on the playground,” she said. 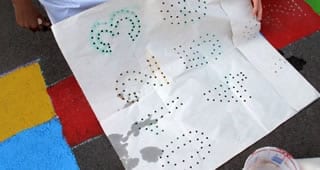 A total of 25 colorfully painted game stations are now prominently featured on the asphalt portion of the SFES playground.

“There are more 100 different games that kids can now play on our playground,” Loehr said. “We did a survey and found that a lot of kids don’t know how to play basic playground games like four square and hopscotch, so those games are included.

“We have different stations which focus on letters, numbers, and geography,” she said. “There is a skipping track, along with tetherball, football and soccer as well. There is also a full map of the United States for geography-related games. It is quite a sight to see.”

“When the kids play these games, they learn to follow common rules and how to deal with problems that might come up during the course of a game,” Schwab said. “It does a lot to steer kids away from negative behavior.”

SFES teachers and playground supervisors will take part in a training session in which they will learn the curriculum of the Peaceful Playground program, was well as the rules for each game.

“Every teacher and staff member will go through a training session to learn the right way to play each game,” SFES Principal Kelly Manning said. “It should be fun to see all of the teachers and staff playing these games, during the training.

“We will also be encouraging parents to come during recess time and take part in the games with their kids,” she said. “If they don’t play during school time, they are welcome to come by and play during nonschool hours.”

There are 100 different games that children can now play. 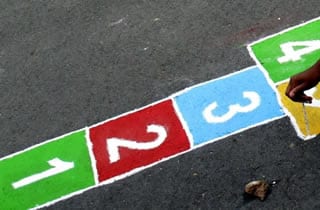 The Peaceful Playgrounds program, which is currently in place at 8,000 schools nationwide, allows for schools to conduct playground-improvement projects on a continuous basis.

“We are looking at this as only the start of the process of improving and updating our playground,” Loehr said. “We have a few other projects in mind, but right now we are focused solely on this one.”

Manning is familiar with the Peaceful Playgrounds program from her previous principal position at Washington Elementary School in Waupun.

“In Waupun, I got to learn how wonderful the program is,” she said. “It provides a great opportunity for kids to take part in cooperative play and be creative.

“It’s not really about being athletic or anything like that. Every child has the chance to play on an even level. The games appropriate for everybody, from early childhood to adulthood.”

Manning, who is preparing to begin her first year as the principal of SFES, has been impressed by the level of commitment displayed by teachers, staff and parents.

“There are so many people that have volunteered their time to make this happen,” she said. “The staff and community support has been outstanding.

“I can’t wait to see the kids’ faces when they see all of this new stuff on the playground,” she said.

“So many people have helped out, including several people from Home Depot,” she said. “We can’t thank everyone enough. All of this is volunteer time that is greatly appreciated.

“We also need to thank our former principal Joe Mukavitz, who left us with a very generous retirement gift to support this project.”

“We have a parent who is painting a train adjacent to the playground to acknowledge all the donors who helped us out,” Loehr said.

More information on Peaceful Playgrounds can be found at www.peacefulplaygrounds.com.

The Review – Sheboygan Falls Elementary Playground Gets a Makeover