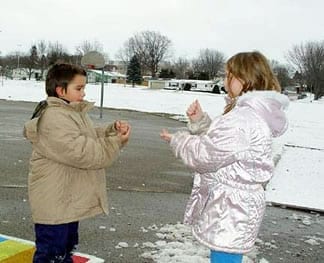 Students at Jefferson Elementary School are participating in a new playground program designed to reduce conflicts during recess time. The solution is Rock, Paper, Scissors and it’s part of the Peaceful Playground Program.

Third-grader Carlos Biddle said that the playground is friendlier than it was last year.

“Boys and girls take turns,” Biddle said. “If there is a problem they do rock, paper, scissors or talk it out.” The students have been working on the walk, talk, rock program since the beginning of the semester, physical education teacher Tim Ladron said.

“If they don’t like a situation, they can walk away; talk it through, or use rock paper scissors to solve the argument,” Ladron said.

The entire program went into effect on Monday. Ladron said the Peaceful Playground Program, which the school’s PTO sponsored, was assisted with a grant. Also Home Depot allowed the school to purchase equipment at reduced rates.

The playground has new colorful markings, new games and new equipment. “There is also a new check-out system where the students are more responsible to bring back the items they took on the playground,” Ladron said.

Clothes pins were used to create name tags for the students. Each class has its own colored pin. Then the names of the student go on the pins. Students have access to play with toys such as bean bags, balls, jump ropes, scoops and balls or plastic discs. “You name it, we’ve got it,” Ladron said.

The students put their clips on the buckets where the toys are stored. When the toys are returned at the end of recess, students retrieve their pins. “That way we don’t lose things like we used to,” Ladron said. The fifth-grade safety patrol kids help the younger students check out the items.

The games on the playground are more focused around having three to four people play instead of the traditional group games which have been played in the past. “The other system was crazy,” Ladron said. “Each grade and each kid would make up different rules for games so no kid was sure what was happening.”

With the new system, an exact set of rules was made up for all the games. Each teacher, teacher assistant and student was taught the rules.

The new colorful games on the playground are also educational, Ladron said. Large number and letter charts are for the kindergarten classes so the students can hop out their phone numbers or their names. Older kids can learn the states while they jump rope on the American map. From handball courts to four-square games, where more than 30 kids can play at once, the students have many more options.

Ladron said that due to weather, and because the size of the playground changed, it will be another year before improvements are complete. Next year, the school hopes to add a track around the younger student playground.

“It will have shapes, numbers and the alphabet,” Ladron said. “So not only will the student be jogging the track but they will see the numbers and work with their letters. It will help the students learn.” A world map will also be painted on the pavement.

Even returning from recess has become more peaceful. The students hear a long whistle and they freeze. Two short whistles are then blown and they walk to the school.

“It avoids collisions and fights while they line up,” Ladron said.

The Recess Advocacy Toolkit includes: parent letters, a powerpoint presentation, a meeting agenda, and advocacy guide for Saving School Recess. It can be download here : https://peacefulplaygrounds.com/right-to-recess-campaign/