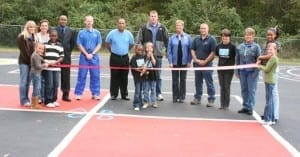 Monticello Intermediate School’s new “Peaceful Playground” was dedicated Friday morning, with students and adults joining to celebrate the opening of the new play space, which is designed to provide games that will teach children conflict resolution and cooperation skills, and combat childhood obesity.

The “Peaceful Playground” is a asphalted area which has a number of different game spaces painted on it in bright colors. A number of different activities can take place on it at the same time, providing physical recreation for a large number of children, and giving them the chance to work together in teams.

The project has been in development for quite some time, said principal Mary Donaldson, and began during former principal Belinda Akin’s tenure. Donaldson also credited the school’s former EAST lab students – Tanner Berry, Hannah Jones, Katie Borden, Chassidy Jones and Maddie Busby – with researching the project and making a presentation to the Monticello School Board to secure their support.

The board agreed that the project was worthwhile, and pledged to pay for the needed asphalt. The MIS students raised the $2,100 needed for stencils, paint and other equipment by conducting a change drive in February.

The recent rainy weather held up work on the project for some time, but a number of district staffers and parent volunteers were finally able to paint the stencils on the asphalt on Monday and Tuesday, October 19-20.

“We had so many volunteers helping us, and our maintenance department just went above and beyond,” said Donaldson. “Everybody did.”

Staffers helped the students learn to play the games on the Peaceful Playground Friday. The rules will be taught, posted and regularly reviewed. As games are learned, new rules are introduced for more advanced levels of play.