Dr. Bossenmeyer is an expert witness on playground injury and playground supervision cases.  She is also a retired Elementary School  Principal.

On average, 17 children die each year playing on playgrounds. 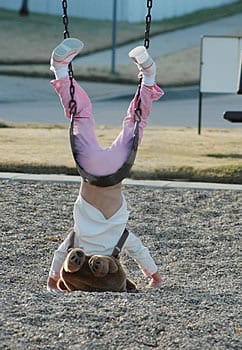 Many deaths and injuries could be prevented if playgrounds – from equipment to surfacing to layout – were designed with safety in mind. When safety is not a priority playground liability is surely to be a issue. When a student is hurt on a school playground, first and foremost, school staff should offer first aid and typically notify parents of the injury if further treatment is needed.

The vast majority of playground injuries are minor and do not require further follow-up. However, it is estimated that 10% of injuries sustained in elementary schools result in a “major” injury requiring follow-up care. In these cases, parents are notified and advised that they should seek further medical care for their child.

Seventy percent of all school injuries occur during recess or physical education. A review of injury data has revealed that the lack of proper supervision is considered a “contributing factor in playground injuries over 40% of the time”.

This article will focus on supervision, “duty of care” and and one court’s ruling related to supervision, as an illustration of supervision issues. The notion of “accident”, which is described as “instantaneous”, is examined. Injuries on the other hand are often found to be preventable through established rules and “active” supervision, the kind of supervision which is proactive to intervene in dangerous play.

which generally focus on a three pronged “standard of care”:

A common refrain in lawsuits is that the supervisor’s failure to observe a child at the time of injury constitutes a negligent act and therefore the supervision is inadequate. However, failure to observe a student at the exact time of the injury does not always constitute negligence. Observing a particular student throughout the complete course of recess is not practical, especially in light of the number of students a supervisor may be assigned to observe.

Reasonable care does not require constant and undeviating scrutiny of a particular child on a supervised playground. Accordingly, a playground supervisor is not necessarily negligent if he or she fails to observe a particular child at the precise moment an injury occurs during normal play or informal sport activities. Rather, if a student’s behavior was neither dangerous nor unusual, then the supervisor would not be expected to pay close attention to a particular child. 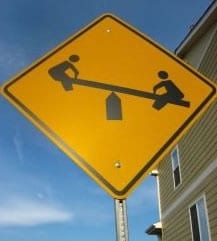 In the case of Norman v. Turkey Run Community School Corp., 411 N.E.2d 614 (Ind. 1980), plaintiff, age 7, was running and bumped heads in a collision with a 6-year-old during morning recess. There was no oral or written directive to defendant’s teachers to prohibit children from running on the playground during a supervised recess.

On that particular day, seven or eight teachers were supervising the recess which was more than the number of supervisors required for the 188 children on the schoolyard.

At the time of the incident, two teachers who were standing in close proximity to the site of the injury, looked up but were unable to warn plaintiff. The trial court, therefore, found in favor of defendant School because the collision was “instantaneous.”

In general, the State Supreme Court noted that persons entrusted with children, “whose characteristics make it likely that they may do somewhat unreasonable things,” have a legal duty to supervise their charges. Further, the court acknowledged that school authorities have a legal duty to exercise reasonable care and supervision for the safety of the children under their control.

As characterized by the State Supreme Court, supervised recess periods are generally accepted as a normal school procedure for elementary school children. Moreover, the court found running and playing tag are normal recess activities for young children. Under such circumstances, the court doubted that there was any unreasonable risk of injury involved, so long as there are no unusual conditions present.

In this particular instance, the State Supreme Court found “no indication that there was any event, dangerous condition, dangerous instrumentality or special knowledge of students having a troublesome or mischievous nature being on the playground area known to the supervising teachers at the recess.” On the contrary, the court found “the only possible ‘dangerous situation developing’ was the fact that students were running on the playground at recess.” Accordingly, the State Supreme Court reiterated its determination that running at school generally does not pose an unreasonable risk of injury.

In the above stated case, the State Supreme Court vacated the decision of the appeals court and affirmed the judgment of the trial court entering summary judgment in favor of the defendant School.

This case points out the importance of establishing rules for proactive supervision, safe play and intervening to stop or prevent unsafe play. This was more than likely a major ordeal for the School as well as the parents and children involved.

The ambiguity in the requirements around duty of care in supervision illustrates certain issues about keeping children safe on the playground. Diligent and proactive supervision on the part of the playground supervisors may not always prevent every injury from happening, but it likely will contribute to reducing the numbers of injuries and also reduce potential liability.